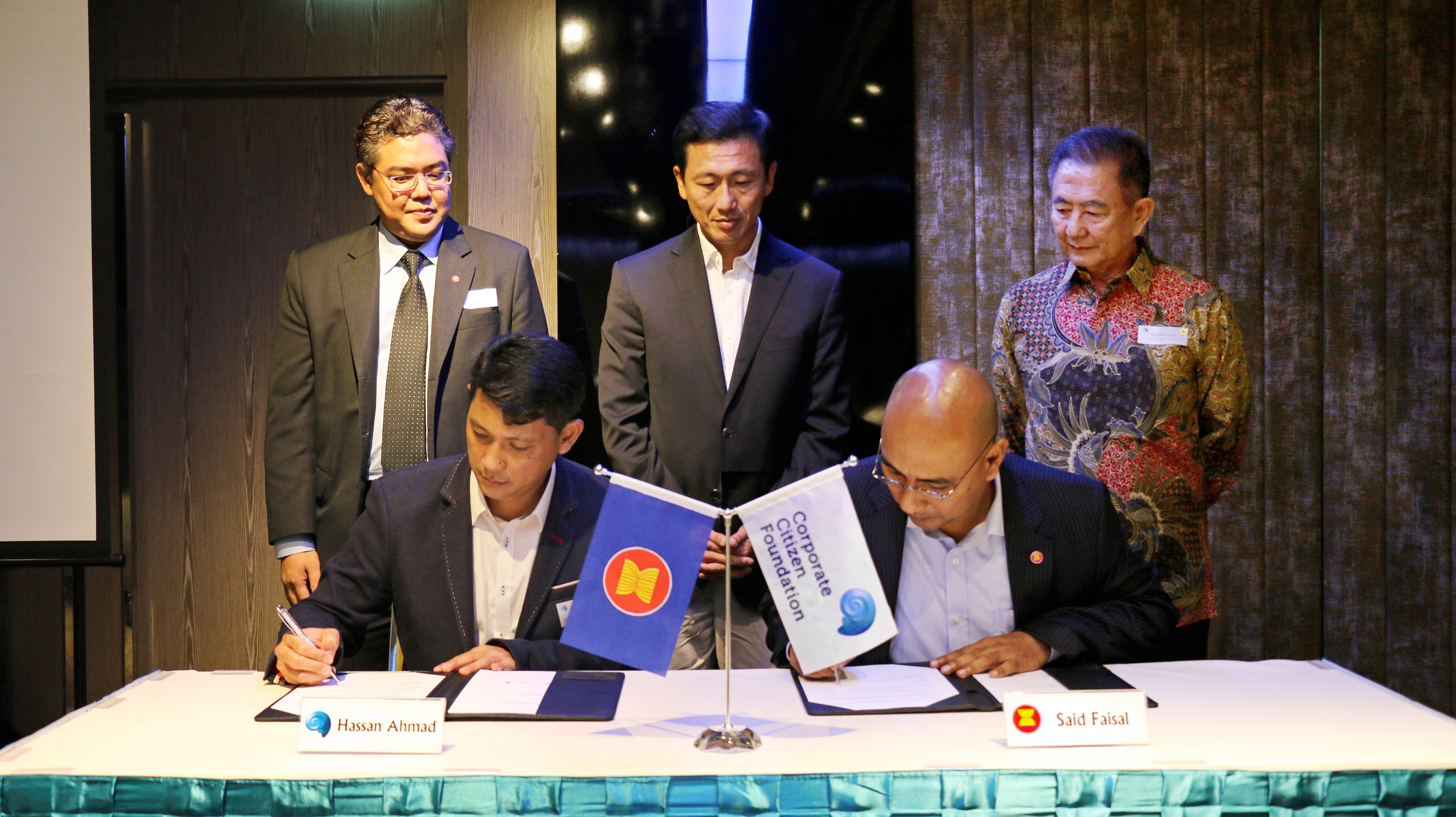 Minister for Education and Senior Minister of State for Defence, Ong Ye Kung, and ASEAN Deputy Secretary-General Vongthep Arthakaivalvatee, graced the event as the Guest of Honour and Special Guest respectively, along with foreign dignitaries, diplomats and corporate leaders. Senior members of the ASEAN Secretariat and the ASEAN Committee for Disaster Management (ACDM) were amongst the guests.

In his address at the ceremony, Minister Ong said, “The Corporate Citizen Foundation (CCF) is an interesting story with a unique plot and proposition – one which goes beyond the traditional CSR or corporate philanthropy initiatives. It adopts an alliance-driven approach, to proactively, collectively and personally address real humanitarian issues in the region.”

(left) A one-minute prayer for the safety of humanitarian workers and peace for our region led by inter-faith leaders.
(right) Guest-of-Honour Minister Ong Ye Kung delivered his address emphasising on how the CCF and its SEED partners promote proactive corporate participation in regional disaster management.

At its inception, the CCF had carefully chosen to fill the glaring gap within the existing regional humanitarian ecosystem – the lack, or rather the absence, of proactive corporate participation in regional disaster management. While the Public and People sectors had long come together and embarked on collaborative frameworks, the Private sector had always been deemed to be passive funders/donors of disaster relief efforts. The CCF partners had structured and positioned themselves, hinging on each other’s’ assets and expertise, to be usefully and meaningfully relevant to the further development of the humanitarian framework within the region.

In his welcome note, Chairman of CCF, Lim Choo Leng, shared, “It has been a fast, and interesting journey thus far, for the CCF and our partners. Looking back a year ago, we were barely 40 days old when we deployed our first SEED mission (or the Swift Emergency Evaluation Deployment) to the Philippines, last December. In fact, at that point of time, we were supposed to be conducting our first Table-top Exercise, amongst the partners. The second deployment came shortly after. This time, in response to the massive Kelantan floods in Malaysia. A few months later, in April this year, the CCF and SEED were again activated for the destructive earthquake which rocked and ransacked the lives of our friends in Nepal”.

The Memorandum of Intent (MOI) was signed between the AHA Centre’s Executive Director, Said Faisal, and his counterpart from the CCF, Mr Hassan Ahmad. The MOI marked a significant step forward for the ASEAN Agreement on Disaster Management and Emergency Response (AADMER) – the legal instrument, which is a proactive regional framework for cooperation, coordination, technical assistance, and resource mobilisation in all aspects of disaster management, involving stakeholders from all sectors.

“The role of private sector in disaster management is significant due to their vast resources, expertise and capacities, enabling faster and bigger response in disasters. Today, the AHA Centre is pleased to embark on this journey by working closely with the private sector namely the CCF, which also reiterates our One ASEAN One Response inclusivity where all actors including private sector jointly responding to disasters as one”, stated Mr Said Faisal in his speech.

In essence, the MOI closed the loop of tri-sector (public, people, private) participation in disaster management for ASEAN. The MOI allows for the active cross-sharing of resources between the two organisations including the sharing of assets, expertise and networks.

Mr Lim added, “It has been both, a challenge and a blessing, given the path that we (CCF and its corporate partners) have decided to take – one which is unprecedented. It is challenging because, there are no templates or Standard Operating Procedures (SOPs), that are readily available for us to ‘cut and paste’ from. But at the same time, it is a blessing, as there are no existing benchmarks or yardsticks, to pressure us”.