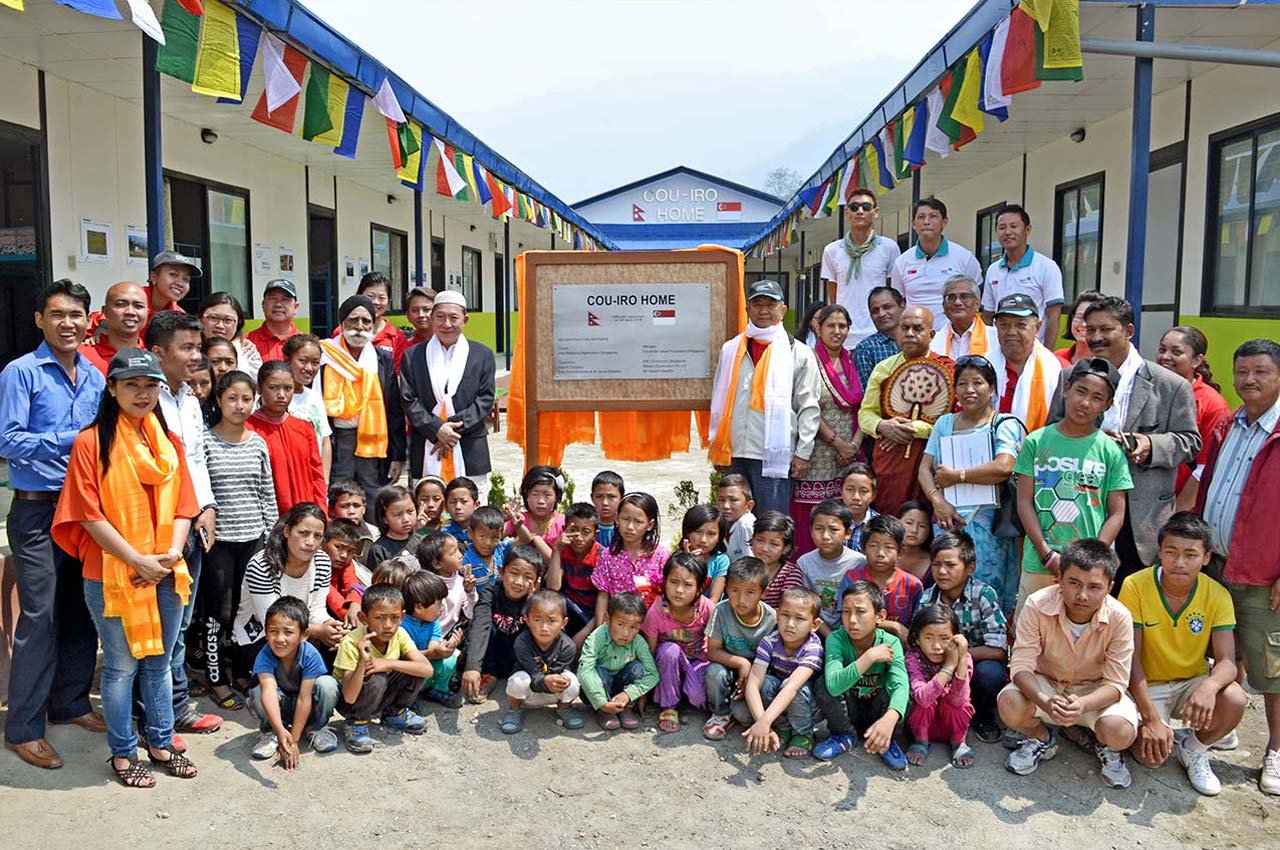 The children of the Children of the Universe (COU) orphanage had their previous home badly damaged by the Gorkha earthquake. Ever since, they had to endure the rough conditions of living in temporary shelters made of tarpaulins and zinc sheets.

(left) Façade of the COU-IRO Home, following months of construction at Songla Tokha.
(right) Corporate volunteers from CCF partner, HSL Constructor, helped transform the orphanage into a fun, vibrant home for the children with colourful hand-painted murals. Today, the children were joined by interfaith leaders from the Inter Religious Organisation Singapore (IRO) at the inauguration ceremony of the newly-built COU-IRO Home.

The reconstruction project which cost S$180,000 was substantially funded by the IRO and managed by Singapore’s Corporate Citizen Foundation (CCF).

Upon arrival, representatives from the IRO were greeted warmly by the children, followed by a walkthrough of the construction and development of the newly-built orphanage.

In his address at the ceremony, CCF Chairman Lim Choo Leng said, “This building is not just a shelter from the monsoon rains, or the winter winds, and the searing summer sun. It is a place where the children will be able to set it as a base for their personal growth and a brighter future… A place that they would proudly and happily want to call – home.”

(left) CCF’s Chairman Lim Choo Leng extends his gratitude towards the various organisations for their support and commitment towards the reconstruction of the home.
(right) Various faith leaders offered prayers to bless the newly-reconstructed home and the children residing in it.

Excited youths and guests gathered to witness the unveiling of the COU-IRO Home stele, marking the official launch of the orphanage.

The donation from the IRO was the initiative of the late Mr Lee Bock Guan, former President of Singapore’s Buddhist Lodge.

A day earlier, CCF collaborated with its quake relief partner, Hotel Annapurna, to hold a joint observance for the Gorkha quake anniversary at Hotel Annapurna. Interfaith leaders from Singapore and Nepal led a minute of prayer in silence. At the observance, Mr Lim had shared, “Nepal is close to our hearts. The Gorkhas played a significant part in Singapore’s national security during our early years of nation-building. It is now our turn to return that gesture of goodwill and support for the post-quake rebuilding efforts.”

(left) Guests and corporate partners lounging at the multi-purpose hall which houses numerous English books, (right) while the children practiced reading to improve their literacy skills.

(left) At the centre of the home stands a large biogas garden, built to supply clean energy for the home.
(centre and right) The children also received stationery and clothing essentials donated by various corporate partners, along with a cake to celebrate the momentous occasion.